Like the loving Hobbits who lived in J.R.R. Tolkien's Middle Earth, Michael and Debbie Howard had never journeyed far from the quiet shires of England. But a while back our friends boarded a plane for America and experienced an adventure of a lifetime, one that included seeing J.R.R. Tolkien’s original manuscripts and drawings at Marquette University's Raynor Library in Milwaukee, WI. 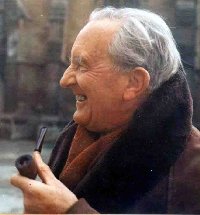 J.R.R. Tolkien, Marquette file photo
“There’s a certain irony about leaving leafy England for America to see the manuscripts of one of our most celebrated English writers,” Michael expressed. He was surprised to learn that Middle Earth had ended up here in the Midwest, just a few hours drive from Peoria, IL where my husband Dan and I live.

The Howards became friends during our 30-month stay in England. Michael and Dan have been Tolkien buffs since they discovered the peerless fantasy writer in the 1970s. After the cinema release of The Fellowship of the Ring and The Two Towers, they spent many nights talking Tolkien over a few pints at our local pub.

Eventually, we bid farewell and moved back to America. While unpacking boxes, Dan came across an old newspaper clipping reminding him that Tolkien’s original manuscripts of The Hobbit and The Lord of the Rings are housed “like rare and delicate medieval relics” in the archives of Marquette’s library.

What a timely find! Michael and Debbie were planning their first visit to America. I called Matt Blessing, the library’s director of special collections and archives, to see if we could view Tolkien’s manuscripts while our friends were here. It’s almost as if he said, “Speak friend and enter.”

Me, Dan, Matt, Mike and Deb
So we planned our trip to Middle Earth, or as close to it as we’ll ever get. The library was preparing for The Invented Worlds of J.R.R. Tolkien exhibit. So many items, normally available only to scholars, had been unpacked for our viewing.

The anticipation leading to the day was almost unbearable, especially for Michael. He recalled thinking, “Well, as Sam might have said, ‘Me! What me go and see elves and all!  Hooray!’” He’s been a Tolkien enthusiast since his college days, since the night he passed on a midnight game of bridge to finish reading The Lord of the Rings.  “I was so taken with both the story and the use of language that I read it in a single sitting, skipping a whole day of lectures. And I’ve been reading and re-reading it and its companion works ever since,” he said.

Dan, too, has read the trilogy many times, finding more depth in the multilayered text with each reading. “I’ll always remember that first reading, the magic of that first journey to Middle Earth,” he said. Debbie and I are more recent Tolkien fans, so when we walked through the library doors, we could only appreciate the teary-eyed gaze and the great sense of awe our husbands felt that day.

Tolkien’s original version of Thorin’s map from The Hobbit, showing the location of Smaug's treasure and the secret entrance to the mountain, were spread before us as Matt unfolded stories of the author. He told us about the day The Hobbit went from a bedtime story Tolkien told his children to the first sentence in the book.  “In the early 1930s, Oxford dons didn’t make a lot of money and often subsidized their pay by grading student essays. It was terribly boring, but they had to take it seriously. Tolkien often told the story about coming across a blank page while grading one of the essays. He thought to himself ‘Isn’t that a pleasant little page I don’t have to read.’ He wanted to write the student a note, but instead he wrote – ‘In a hole in the ground there lived a hobbit.’”

The Hobbit came out in 1937 as a fairy tale and sold reasonably well. The publishers, Allen and Unwin, asked Tolkien to write a sequel, so he began working on The Lord of the Rings. During World War II, Tolkien was making huge strides on the trilogy when the London warehouse storing  The Hobbit was bombed by Germans. With all copies destroyed, Tolkien saw a good opportunity to go back and revise Chapter 5, “Riddles in the Dark” to set the stage for The Lord of the Rings.. In the revision, released in 1946, Gollum was a much nastier character and the ring had become a much darker, more sinister force, Matt explained.

Listening to Matt that day, and seeing Tolkien’s manuscripts, was more like an extension of his fantasy than reality. We saw the great author’s mind move through Middle Earth, the evolution of change as he journeyed through multiple working drafts where handwritten corrections rested with a sigh in the margins.

Michael noted, “Tolkien wasn't just writing a story; he was creating a tale, and consciously endowing it with as much reality as possible, creating languages, calendars, histories, genealogies and legends. I had expected to find something like this but was quite moved to see just how much care he had lavished on his work”

We were fascinated with the creative passion Tolkien must have felt as he wrote his tales wherever, and whenever, possible. Much of The Lord of the Rings was written during World War II when paper was in short supply. It was humbling to see his tales come to life on the backs of student exams and faculty menus. During the war, Tolkien served as an air raid warden and even wrote drafts on the back of reports while watching for German aircraft.

Eagle & Child, Marquette file photo
While viewing the manuscripts, Dan felt as though he’d come full circle. One of our greatest English adventures was a trip to Oxford where we traced Tolkien’s steps. We had lunch at the Eagle & Child, a cozy pub where the Oxford don met C.S. Lewis and other writers, known as “The Inklings” to discuss their works in progress over a pint.

Like most Tolkien fans who gaze at the exhibit, we were overwhelmed with the dim scent of an ancient world. Dan said, “I actually touched Tolkien’s script and the sketch of the arched doorway into Moria where the elfish rune says, ‘Speak friend and enter.’”

Michael said one his highlights was “seeing the original autographed page from the book found by Frodo and his companions in the chamber of Mazarbul, colored and distressed by Tolkien to give it the right feel and sense of history.”

It was a thrill for Michael and Debbie to travel half way around the world to see the creation of a tale born in their own country. Michael said, “We all owe a debt to Marquette for maintaining and developing this important collection. Tolkien would have been astonished and delighted to be left such a memorial. I doubt any writer is capable of creating such an enduring masterpiece although many have tried to imitate him. Sadly, he dwells now beyond the circles of the world and does not return.”