Lost in Time on Kenosha Lakefront 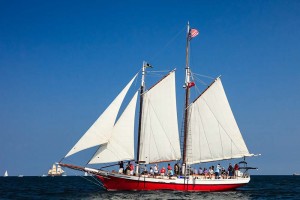 Today, five hundred and twenty-seven years later, Dan and I boarded the Red Witch, a similar wooden schooner that set sail for a sunset cruise on Lake Michigan. Not  exactly as adventurous as crossing the Atlantic Ocean with Columbus, but it was thrilling to be on the authentic ship with towering masts to support the massive sails billowing in a gentle summer breeze, waves lapping against the hull.  Not to mention it was romantic cuddling near the bow with Dan.

The 70-minute venture was the high point of our recent trip to Kenosha, Wisconsin.  As Captain Andrew Sadock motored away from downtown's Kenosha Harbor, we savored the scenic views, especially the 50-foot North Pier Lighthouse with its cylindrical lantern.  As soon as we reached the lake, the shipmates lifted the sails and offered us a glass of wine. We were lost in time!  On the way back, we basked in the colorful reflections of city lights shining on the water. And the sunset was everything we had hoped for as the sky caught fire, fusing blue, pink, melon and yellow hues into a fine painting - a moment sketched in our minds with memory's finest brush.

We also experienced the bygone days while riding an early 20th century electric steetcar, one of seven that has been restored and reintroduced to Kenosha in 2000. The system transports locals and visitors on a two-mile loop, taking them to and from museums, restaurants, and other attractions along the lakefront. Don't expect to ride for a nickel anymore, but the $1 fare is worth saving your feet for other ventures - such as walking through the vibrant Harbor Park neighborhood. The former industrial area has been redeveloped with flower-filled courtyards, sculptures, fountains, and parks.

The winding lakefront promenade was just a few steps from the harbor-side hotel where we stayed.  Just a short stroll away, we planned our days at Common Ground while enjoying a cup of  Fair Trade coffee.  Early morning runners and cyclers muscled their way around the lake;  later on, families arrived for a summer outing and fishermen cast lines, mostly for brown trout or smallmouth bass.

For us, the walkway offered a respite between wining and dining, tipping a pint at the pubs, and visiting monuments and museums.

A patriotic spirit is alive and well in Kenosha. We were moved by the Veterans Memorial Fountain which features a huge bronze globe and battle ground relics, including an eight-ton boulder from Okinawa and sand from Normandy beach.  Adjacent, the Lone Soldier Memorial honors veterans from every war fought by the United States since 1776 and memorializes the casualties of each conflict.  Numerous flags and bunting echoed the town's sentiment from area condos.

We were also impressed by the Civil War Museum which highlights the courage and devotion of  more than a million Union troops from the Upper Middle West - Wisconsin, Illinois, Michigan,  Indiana, and Minnesota.  The museum features several interactive exhibits and history comes to life through the realistic scenery, and artifacts from the battles. Most memorable was the harrowing narratives of  men, women and children who were impacted by the war.

Our trip ended on a lighter note as we crossed the nearby 50th Street bridge and walked the short distance to Simmons Island to watch the sunrise and comb the beach for seaglass. It was hard to leave this lakeshore haven and we plan to return again soon.