Rollin’ on the river with the Spirit of Peoria

Imagine rolling down the river on an authentic paddlewheeler. The horizon is a golden riot of autumn splendor. You’re watching bald eagles soar in the distant sky, drinking a glass of wine, and listening to old-time tunes piping from the calliope. Welcome aboard the Spirit of Peoria! 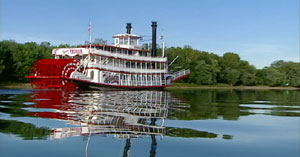 The Spirit of Peoria worked her way down river
My husband Dan and I have always been enchanted with the Illinois River, but spending a two-day vacation in our own backyard never crossed our minds until recently. For us, a real vacation meant getting away.

Then our friends from England visited and suggested boarding the Spirit of Peoria for a two-day riverboat cruise to historic Starved Rock State Park and back – and spending the night in a pioneer log cabin. They had never been to America, and their excitement about the river trip was intoxicating.

What a great getaway it proved to be. Captain Alex Grieves welcomed us aboard that morning, and fresh coffee was brewing on the second deck. We toured the elegant, three-tiered vessel, a replica of a 19th century “floating palace,” and admired the tin ceilings, ornate railings, swirling gingerbread and towering black smokestacks. The captain said it’s a true paddlewheeler, the only one on the Illinois River. Its only form of propulsion is the churning, cherry red paddlewheel in the stern, powered by two Caterpillar engines. 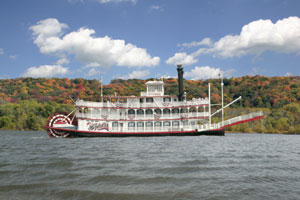 Passengers enjoyed the golden riot of autumn splendor.
The trip began at 9 a.m. with the traditional whistle – one long and two short blasts to signal our departure from the port of Peoria. We found lounge chairs on the top deck, overlooking the river, and made ourselves comfortable. The day stretched before us like a glistening blank slate ready to be filled with adventure. Magically, we stepped back in time as the paddlewheeler plied the river in grand style. Within minutes we realized how much our souls had craved the lost art of relaxation.

The overnight excursion, which runs May through late October, offers a perfect blend of leisure, scenic sights and wildlife, old-time entertainment, and fine dining. Along with our English friends, we shared the trip with folks from all over the Midwest, the East Coast and Australia. The diverse mix created a colorful, small town atmosphere as we chatted on America’s front porch.

Deb waves at a passing train.
People have traveled up and down this river for thousands of years, and surprisingly little has changed. We were in awe of the raw beauty – the wildlife, the lush greenery and unspoiled shoreline that went on for miles. Our friends were quite taken with the display of patriotism as flags waved from grain elevators, homes, and tugboats pushing barges of grain along the way.

Lore of the river

As the mighty paddlewheel worked her way up the river at eight miles an hour, we listened to river lore by storyteller Brian “Fox” Ellis, folk tunes by Barry Cloyd, and ragtime piano by Beverly Wolf. Fox introduced the river as a “time machine” and took us back 350 million years when most of Illinois was a shallow sea. He stopped briefly for the glacial era, and moved on to the massive ice caps that melted 50,000 years ago and carved the river valley. Through vivid stories, he talked about the Native Americans who inhabited the valley over 12,000 years ago, and how they shared the forests and prairies with woolly mammoths, saber-toothed cats, giant sloths, and dragonflies as big as red-tailed hawks.

Unfolding layers of history, Fox talked about the Indians paddling birch bark canoes, soaking willow rods and weaving baskets along the riverbank. As he came around the bend to 1673, it was easy to imagine the French explores using the great river as a highway for trade. He told stories of pioneer days and also the heyday of steamboats (1840-1860) when a thriving whiskey business made Peoria a major destination for travel and trade.

Transportation by steamboat ended with the advent of railroads, barges and automobiles, according to Alice Grady, first mate (and sales manager). Although many river industries moved closer to the railroad, she noted that the Illinois River is still a great channel of commerce for barges of cargo, and many grain elevators, power plants and factories still line its banks.

During the cruise, we saw lanky-legged blue herons wading in shallow water, spearing fish dinners with their beaks. Egrets with white feathered crowns and long-beaked pelicans gathered at the backwater slough south of Henry. At one point, we saw 17 red-tailed hawks gliding through the sky in search of prey below. Seagulls were our constant companions, sparkling like wayward stars in the sky. Of course it was the bald eagles that highlighted the trip. The captain let us know when he spotted one or two soaring in the distance. In awe of the majestic bird, we rushed to the railing with cameras and binoculars.

Keeping with tradition, the calliope caressed the air with song as we approached each river town. Coming in to Henry, Fox noted that one of the river’s first locks and dams was built there in 1872, giving the town its slogan, “Best little town by a dam site.” The captain whistled a hearty salute as we passed a cottage along the river where legendary “Steamboat Elsie” Logman, a friend to the river men, lived in the 1930s. Elsie was instrumental in getting information to river pilots before the days of two-way radios. She put a message in a bottle tied to a string and, from an old drawbridge, lowered it to the pilot.

Captain Grieves at the wheel
One of the biggest thrills was climbing to the pilot house where the captain let passengers take control of his seven-foot wheel. Since the Spirit of Peoria has no fancy controls, piloting the boat can be challenging, especially during landing. “Sometimes, with the wind and current, landing is like playing a video game,” according to the captain. And when the river is high, it takes tricky maneuvers to dodge floating debris, logs and broken docks. Once, he even had to zigzag around a full-size refrigerator.  Even so, he said piloting a riverboat is easier today than in earlier times. “We have more sophisticated maps now. And the current is more predictable because the river depth is maintained with a nine-foot channel and channel lines are marked with buoys.”

Rustic cabin in picturesque setting
At 6 pm., after a fine prime-rib and chicken buffet, we disembarked at Starved Rock. According to Indian legend, the Illiniwek starved atop this wooded bluff after taking refuge from the Ottawa and Potawatomi tribes in the 1760s. Passengers had the option of spending the night in the historic lodge or in pioneer cabins overlooking the picturesque Illinois River. Evening entertainment included trail walking followed by a steamboat era presentation given by Bob Anton, a Mark Twain re-enactor and the first Spirit of Peoria captain.

One of several waterfalls at Starved Rock
Thinking back, it was quite surreal to spend two days on the Illinois River, listening to the whispering rumble of history. Without a doubt, the crowning glory of the trip was sharing the American spirit of adventure, the unfathomed depths of our own backyard, with our English friends, our brother and sister in heritage.

This feature first appeared in The Daily Journal (Accent on Travel), Kankakee, IL