The natural beauty of Chincoteague and Assateague islands staggers me. Perched along the unspoiled Atlantic coastline of Virginia and Maryland, they boast glorious sunrises and sunsets, and beckon visitors to linger and explore nature trails, tranquil beaches, marshes, sand dunes, and forests -- all teeming with wildlife.

But the most popular inhabitants are the wild ponies. Although they’ve roamed both islands for centuries, it was Marguerite Henry’s “Misty of Chincoteague,” a heartwarming story about a real-life foal that has lured visitors here since 1947.

It was the legendary ponies that brought me and my 8-year-old granddaughter Natalie to Chincoteague (pronounced shinko-teeg), Virginia. No one really knows the origin of the ponies. Legend says they’re descendants of wild mustangs that swam to shore after a 16th century Spanish galleon shipwrecked off the coast. But research suggests they’re from a line of domesticated ponies that came in the early 17th century with colonial farmers.

We arrived on the island at a perfect time, because any time casts its magic spell on this quaint fishing village filled with history, legend, and adventure. “Life is always unfolding here. You have to pay attention. Go slow or you’ll miss the beauty and charm of it all,” native islander Lou Hickman tells visitors.

Natalie and I stayed at a hotel which is beautifully placed along Chincoteague Bay and known for its small-town hospitality. That’s how we met Lou, one of the hotel’s directors, who loves to talk about the ponies and the time-honored traditions they’ve brought to Chincoteague.  “Some say the island isn’t what it used to be because of bigger and fancier buildings. But the people are the same and nothing has changed the island’s heartbeat or taken away its soul,” she assured. As we walked with her along the hotel’s boardwalk, the persistent “ha-ha” calls of gulls competed for our attention.  “Laughing gulls. Watch ‘em, they’ll take a sandwich right out of your hand,” she warned.

Chincoteague is a cozy, thriving community that’s only seven miles long and one and a half miles wide. Big sister Assateague is a 37-mile stretch of undeveloped beaches. It takes in parts of Maryland and Virginia and includes Assateague Island National Seashore as well as Chincoteague National Wildlife Refuge. Assateague provides a safe haven for the ponies and nearly 300 species of birds and other wildlife, including Sika deer and the endangered Delmarva fox squirrel.

Chincoteague means “beautiful land across the water,” and was named by the Indians who lived on the island before settlers arrived in the 1670’s. By the 1800’s, the island supported a prosperous seafood community which remains today. “We’re famous for our salt oysters which are salty, sweet and buttery at the same time. If you have to put anything on them, they’re not from Chincoteague,” Lou said with pride.

Many of the 4,500 residents are descendants of early settlers and grew up listening to stories about the Chincoteague ponies, especially the annual pony swim and auction which has taken place since 1925. It was during the 1946 event that newborn foal Misty struggled to swim the channel and was rescued by a young boy. Since then, Misty’s story has captured hearts worldwide.

Natalie and I were eager to see the ponies and had signed up for Captain Mark’s Pony Express Tour. Lou suggested we be back at sunset. “It’s a magical time. The wildlife makes its transition from day to night, and you can see it all if you pay attention.  Even the ducks notice. Several families line up on the boardwalk before jumping into the bay and swimming to the grasslands to sleep,” she said. 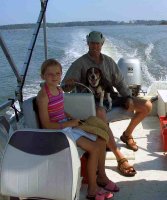 Natalie, Captain Mark and Koko
Captain Mark and his beagle, Koko, met us at the dock where we boarded a small flatboat to venture into Assateague’s remote areas where the ponies roam. The ponies consist of two herds. The “Chincoteague ponies” make up the Virginia herd, owned by the Chincoteague Volunteer Fire Company. The Maryland ponies are managed by the National Park Service. Each herd has approximately 150 ponies which are separated by a fence at the Maryland/Virginia line.

Within minutes we caught sight of a small herd nibbling on salt marsh grass by the historic Assateague Lighthouse. Natalie’s eyes widened in excitement.  As we sidled towards shore, one of the mares whinnied and another nipped playfully at her shaggy foal. The lone stallion kept a protective eye on his harem as we moved closer.

Captain Mark dropped the anchor. “We usually see bands of five to 10 ponies, including a stallion. They’re not as big as horses but quite sturdy. They might look tame, but they’re wild, so we can’t get too close,” he said.

There in the sweet peace of a summer afternoon, our eyes took in the tranquil lives of these wild ponies who have survived all these years in a harsh environment that offers no more than a diet of dune and marsh grasses. We listened as the sun-kissed water gently licked the boat and a slight breeze danced through the sweeping marsh dotted with rose mallow. An eagle soared above the tree line nearby. It was like a scene lifted from a painting – a moment in time when even the click of a camera would have been an imposition.

The captain then maneuvered the boat through secluded backwaters until we spotted another herd poised in the sand dunes. Anchored there, we saw snowy egrets and a glossy ibis and listened to the noisy whistle of an oyster catcher – a bird-lover’s paradise for sure. But our eyes returned to the ponies and their grand markings which have been passed down through generations. The much beloved Misty had a reverse map of the United States on her left side and the shape of a farm plow on the right. "They’re a breed of their own,” the captain explained.

Riding ponies at the ranch
Later that day, we visited the Chincoteague Pony Center which is home to many of Misty’s descendents and veterans of the swim. Then we drove past the Beebe Ranch to see where Misty once lived.

Natalie and I were back at the hotel in time to see the sun’s tangerine glow shimmering on the water. Soon its warm radiance was replaced by a glorious purple-pink aura. A lone blue heron plucked his dinner from the bay; fishing boats returned to the harbor. And sure enough, the ducks were lining up on the boardwalk. One by one, they jumped into the bay and swam to the grasslands beyond – except a little fellow who was nervous about the plunge. We exchanged a worried glance. But after a few wee “peeps,” he finally jumped in and caught up with his siblings.  As Lou said, you have to go slow, pay attention.

Nature at its finest

Glorious sunset
Next morning, our wake up call came as the laughing gulls circled our balcony for a handout; the ducks were returning to enchant early risers. Over breakfast, guests swapped tales of their island adventures. Many were excited about the hands-on escapades they had during Captain Barry’s Back Bay Tour – a must do! Talk to anyone on the island and sooner or later Captain Barry’s name comes up.

Prior to our visit, I talked to the captain about his popular tours which take visitors to deserted beaches and other inaccessible places – “secret little spots,” he calls them. “Their senses come to life as they shuck oysters, handle jellyfish, munch on seaweed and listen to colorful tales about pirates and smugglers who once inhabited the island. I tell them to be prepared to get their hands dirty and their feet wet,” he said. Unfortunately, the captain was committed to student tours on land during our visit.

On day two, Natalie and I took an easy trail through the forest to see the stately Assateague Lighthouse built along the barrier islands in the mid 1800’s to warn sailors of danger. To our surprise, we met Captain Barry and the students who were going to make the lighthouse climb. “Come on and join us,” he said with a beaming smile. We fell in line.

After ascending 198 spiraling steps, we were rewarded with a premier view of wild ponies prancing along the beach, their hooves splashing up diamond-like bits of water in the sunshine. The scene was overwhelming and well worth the climb.

Fishing for Chesapeake Bay crabs
We hung out with Barry and his group most of the afternoon as they fished for Chesapeake Bay crabs and learned about horseshoe crabs which are used by local fishermen for bait. Captain Barry’s enthusiasm for nature and his appreciation for the fickle moods and beauty of these islands are contagious. “What makes Chincoteague and Assateague so nice is that they haven’t been discovered yet like the big resorts. Time spent here is so relaxing that visitors feel well rested when they leave. They don’t need to go home and take a break. Tourists come here all year long. Each season has something to offer,” he said.  And to think, it all started with the wild ponies, especially a foal named Misty.

Lou said, “Who knows how things would be on Chincoteague today if Misty would have been able to swim the entire channel. Misty brings parents to the island who didn’t get to come as kids after reading the book. They’re living out their dreams. Even though they bring the kids, it’s their trip. But we have so much beauty here; I like to think we would have been discovered anyway.”

Each July, when the air is thick with humidy, Chincoteague's "saltwater cowboys" brave the biting horseflies and blood-sucking mosquitoes to round up the island's wild ponies for the annual "Pony Penning" swim and auction.

During the pony auction, as many as 75 colts are sold, becoming the silent heroes who provide funding to the Chincoteague Volunteer Fire Company which manages half of the ponies. "People come from all over the country to see the swim and bid on the colts," according to Roe Terry, a 29-year veteran fireman and public relations officer for the company. "The colts go to good homes and bring as much as $1,800 each; so they're not bought on a whim."

Pony Penning festivities begin with a month-long carnival. Then, on the last Wednesday of July, the cowboys, mostly volunteer firemen, swim the entire herd across the Assateague Island channel to Chincoteague as thousands of locals and visitors line the shore. The first colt to reach land is crowned King or Queen Neptune. The grand auction is held on Thursday after the mares nuzzle up to their colts for the last time.

For more information on Chincoteague Island or the pony swim, call the Chincoteague Chamber of Commerce (757) 336-6161, or visit www.chincoteaguechamber.com

This feature first appeared in The Daily Journal (Accent on Travel), Kankakee, IL